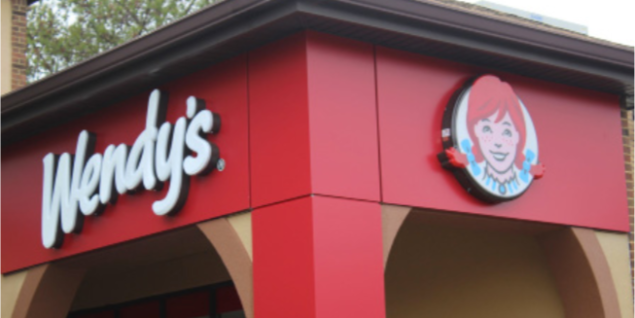 Is there a better way to welcome everyone back for the new spring semester than with a grand opening of a new fast-food restaurant on campus?

Students and administration gathered in The Shops at Hampton Harbors parking lot for the grand opening of Wendy’s on Jan. 24. President Dr. William R. Harvey kicked off the event with a short speech on behalf of everyone who was able to make this happen, followed by a ribbon-cutting ceremony.

“Hampton University proudly welcomes Wendy’s to ‘Our Home by the Sea,” Harvey announced to those gathered around him.

Wasting no time, President Harvey and other administration and individuals responsible for the making of this establishment, including SGA president Jonathan Mack, picked up scissors for the ribbon-cutting ceremony and simultaneously cut the ribbon, thus granting access to the establishment.

Full of excitement, students swarmed into the newly built restaurant for free Frostys in honor of the grand opening. HU student Casmere Street, a sophomore strategic communication major and leadership studies minor from Chicago, was one of the many students waiting to order along with some of her fellow members of the Greer Dawson Wilson Student Leadership Program.

“I feel like this new Wendy’s is bringing amazing new job opportunities,” Street said. “It’s also a great place for students to hang out.”

This new location comes with full-time management positions and 30 part-time positions for individuals in the Hampton Roads community, created by franchise owner Wen GAP, marking this its 22nd establishment.

This particular location consists of an indoor restaurant as well as a drive-thru. Inside the restaurant, there are multiple kiosks for self-ordering, a Pepsi drink machine, booths and sofa chairs for lounging.

In regards to the campus community, this new fast-food option is huge. At the start of the 2019-2020 academic year, a full-service Chick-Fil-A and Pizza Hut were built in Hampton University’s Student Center, serving as new food options for the students on campus in addition to the previously established Pirate’s Cafe (in conjunction with Starbucks), Planet Smoothie, Pirate’s Grill and University Cafe.

Wendy’s will now join Wing Zone, Subway, Tropical Smoothie Cafe, Palm Tree Carribean Cafe, and Golden City Chinese Restaurant as food options in The Shops at Hampton Harbors. For students living on campus, they have multiple places to choose from in close walking distance when the cafe food isn’t quite in their appetite.

“I love how they decided to bring an affordable food option as opposed to something that costs a little more,” Morgan Albert said. “Being a college student, you only have so much to spend. At Wendy’s, you can get a whole meal and more for about five dollars.”

Albert, a sophomore chemical engineering major from Detroit, was one of the many students excited to see Wendy’s on campus.

“This is going to be everybody’s new go-to on campus,” Albert said. “I can already see it. They should expect some huge traffic after 12-2’s and other functions.”

This new addition to Hampton’s campus seems to already be a favorite by many. They should expect to be around for a while because Hampton students sure hope so. Especially for the 4-for-4 meal deals.