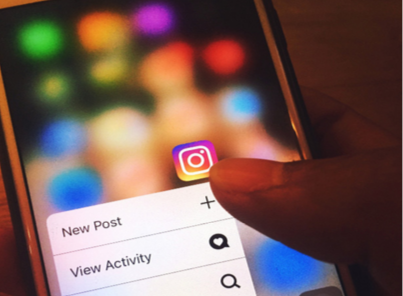 In this day and age, it is becoming more uncommon to see people not connected to various forms of social media, and to not be well versed in the countless social outlets that these sites offer us. As sites such as Instagram, Snapchat and Twitter take the world by storm, it is easy to lose oneself in the digital world, and we as human beings even begin to curb our behavior in accordance with how we want ourselves to be portrayed on these social media sites.

“Finsta,” in the Student Center Atrium on Jan. 29.

Although the event involved the mental health aspect of all social media, it did zero in on “Finsta” accounts, which are essentially fake Instagram accounts. When asked by the counselors leading the event why the audience had fake Instagram accounts, many Hampton students admitted that while their real Instagram accounts were meant to cater to their followers, and to let the world know what they wanted the world to see, their “Finsta” accounts were kept to a small amount of followers and close friends, and the content consisted of the more private and the more authentic side of themselves, the very things they don’t want the world to know.

The Finsta account is meant to be more expressive and raw, since it’s reserved for those select few, close friends, whereas the real Instagram account is all about the image and protecting that image, much like how we as people put on different faces for our different audiences. (Do you talk the same way to your professor as you do with your friends?)

When asked about his Instagram, Alex Cooper, a junior music performance major from Washington, D.C., said: “Basically, I like just doing my thing on campus, and posting my dance and performance videos to Instagram.”

This also allows one’s real Instagram to serve as a platform for which to showcase achievements and advertise one’s business if one so desires, thus limiting what someone can post naturally, as a way of preserving the image that the user puts out to their followers.

Obviously, such behavior also comes with its share of issues as well. Many Hampton students in the audience admitted that at one point in their lives, they did struggle with their own insecurities attached to social media, whether it came from the amount of likes that they received from their pictures and posts, or comparing their own lives to that of other people. Such struggles only serve to increase one’s anxiety and to hinder one’s self-confidence.

To help alleviate such issues, the counselors in charge of the event suggested that students be more selective about who they like or follow since this could very well change what shows up on their timeline and insert a more positive influence on their social media pages to minimize the comparisons and the anxiety.

Nia Dix, a graduating senior and marketing major from Atlanta, was able to share her own techniques on lowering anxiety and being able to wind down from the stresses of social media, and just the stresses of day to day life in general.

“My way of decompressing comes from watching Netflix,” Dix said. “It lets me escape from reality and allows me to not focus on my troubles at the moment.”

Whether it’s watching Netflix, playing video games, going out for a run or just hanging out with the people you love most, it is imperative not to let influences such as social media dictate your life, and your own feelings of self worth. For at the end of the day, all that matters is your own view of yourself, and no one can change that.