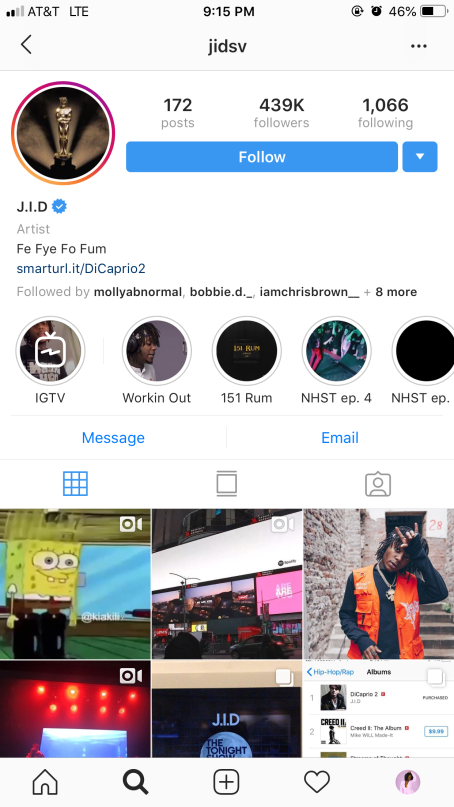 There are few instances where someone rises after their expulsion, but Destin Route has flipped the script. The former Hampton student is signed to the record label Dreamville, run by J. Cole.

Route goes by the name J.I.D, a name he picked up from his grandmother. Since his signing, he’s been one of the hottest up-and-coming rappers in the game.

To add fuel to the fire, J.I.D just released a sophomore album, DiCaprio 2, unlike any project the southern lyricist has ever put together. A big factor is that it was not made in Atlanta, his hometown.

J.I.D has been touring these past two years, meaning he hasn’t been able to record at home. Christo Whelch, one of J.I.D’s main producers, spoke with DJ Booth about crafting the new album.

“[DiCaprio 2] was made on the road while being around the world,” Whelch said.“It allowed us to gather different elements just from other places outside the city and bring about different energy.”

When artists switch their sound, it isn’t always received well. Take Lil Yachty and Vic Mensa, for example. On the contrary, J.I.D picked up new sounds that still reflect who he is. He is a born writer who excels at putting together crazy cadences and a variety of impressive flows.

“When you think about rappers who can rap at an extremely high level, you think about Kendrick Lamar, J. Cole or Logic, [and] J.I.D is on their level,” Hampton University student Kimand Albright said. “He has lyrics where you’re not going to catch the punch line or wordplay the first time you listen because he packs so much in one verse, but there’s beauty in that.”

Even his boss sees the potential.

“The first thing [I noticed] is how gifted he was at putting his words together,” J. Cole told No Jumper in September. “The thing that solidified it was his work ethic. … A lot of people want it, but they [are] not willing to put in the work. He’s not one of those people.”

J.I.D wants you to know he’s going to be successful. He raps on his song Lauder, “I silently swore solemnly that I would be the guy to make my black people proud of me.”

The title of the album comes from the iconic actor, Leonardo DiCaprio. Before 2016, DiCaprio hadn’t won an Oscar. Similarly, J.I.D didn’t have a major label deal, nor did he feel like he was getting the recognition he deserved.

His frustration aligned with DiCaprio which led to J.I.D’s first EP, DiCaprio, in 2015. Three years later, a lot has changed. Route has a deal with one of the biggest rappers in the game and is finally getting the accolades he was seeking not long ago.

Kendrick Lamar, J. Cole and Drake are the three kings during this decade of hip-hop, however reigns come to an end. When these three descend from the throne, J.I.D is setting himself up to snatch it as soon as the opportunity arises.