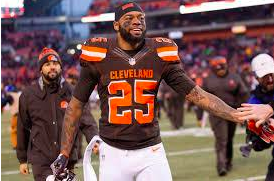 Former NFL player George Atkinson III died Dec. 2 at age 27, one year after the suicide of his twin brother, Josh Atkinson. Currently, there is no reported cause of death for Atkinson. During his NFL career, George Atkinson III played for the Oakland Raiders and Cleveland Browns.
In October, Atkinson released an open letter published by the Unsealed, titled, “How I Turned My Losses into Lessons.” He addressed the letter to kids going through adversity. Within the letter, Atkinson discussed his battle with depression, his traumatic upbringing and how the sport of football changed his life.
Atkinson struggled with expressing himself, not opening up about all that he was going through and just continued to move forward.
“I felt like I had to be this tough guy and show no emotion,” Atkinson wrote in the open letter. Growing up, he and his twin brother had an unstable household. The two dealt with a mother who suffered from paranoid schizophrenia while also having to from house to house.
At the age of 10, he became aware that the way he was being treated was not right. At one point he had to call the police on his mother because she was getting violent toward him and his brother.
The two were taken away from their mom, living with their uncle for two years, and eventually their father, former NFL player George Atkinson II, stepped up to the plate and moved the boys in with him.
Moving in with their father created stability for them. The two then began playing football in high school. Atkinson and his brother ended up with scholarships from schools all across the country but decided that the University of Notre Dame was the place for them to continue their football careers.
Although they were on the road to success, the two were still carrying a lot of pain with them. Last October, their mother died from complications from Crohn’s disease. That same year on Christmas, his twin brother committed suicide by hanging himself.
Atkinson also checked into a mental institution because he had attempted to harm himself.
Battling with depression and struggling with expressing his emotions, he sought out help and began seeing a psychologist.
“We all must make sure we don’t find the easy way out, like using alcohol or drugs to numb our pain,” Atkinson wrote. “That will lead us nowhere. We have to face our problems head-on, whether that is talking to people, praying or listening to motivational speeches. Whatever helps you get through a tough time, that’s what you’ve got to do, and that’s what I have to do, too.”

Approximately 46.6 million adults in the U.S. endure the reality of managing a mental illness every day, meaning that 1 in 5 will live with a mental health condition at some point in their lifetime, according to Athletes for Hope. People are often under the impression that athletes don’t have mental health struggles due to all the success, wealth, fame and being able to play the sport that they love. In reality, athletes do have mental health struggles, from the pressures of having to ensure their performance in the game is excelling, family issues, living their life in the public eye, and specifically for
college athletes finding the balance between being an athlete and a student.
According to the Athletes for Hope, 33 percent of all college students experience significant symptoms of depression, anxiety or other mental health conditions. Out of that percentage, only 10 percent of student-athletes seek out help.
Among professional sports, Athletes for Hope said 35 percent of elite athletes suffer from a mental health crisis which may manifest as stress, eating disorders, burnout, or depression and anxiety.
Lanece Carpenter, a first-year sports management manager with a minor in leadership studies, thinks that sports teams need to increase their counseling offerings.
“They can support athletes in terms of mental health by meeting the growing demand of sports psychologists and providing mandatory counseling for all athletes,” Carpenter said.