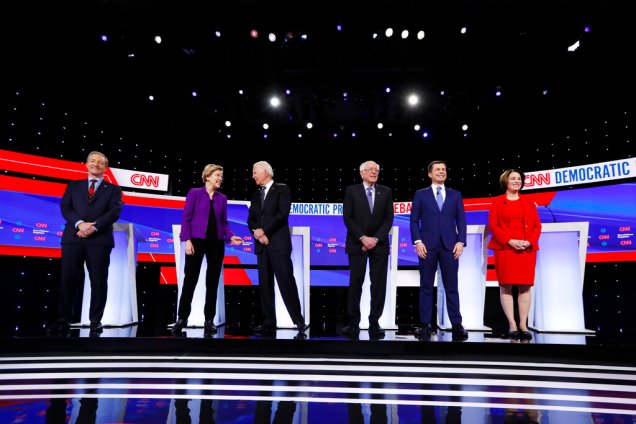 As the Democratic presidential nominee race comes closer to an end, registered Democratic voters have a tough choice ahead of them. They have to choose who is going to represent their party to go against the likely Republican nominee, President Donald Trump. However, with the recent news of both Secretary Julián Castro and New Jersey Sen. Cory Booker suspending their campaigns, as well as Sen. Kamala Harris suspending her bid to the nomination a few months ago, the remaining nominees are severely lacking in diversity.

In the years after the Obama Administration, one would assume that there would be a sharp increase in support for more candidates of color running for the presidential ticket. There is certainly not a lack of people in the eld who are willing to run. Running for any kind of of ce or position where one is going to be representing a large group of people, people will look into your past stance on certain issues. Whether that is public transportation, education or health care, people want to know how these candidates plan on dealing with these problems if they are elected.

For example, Kamala Harris was running and trying to get the nomination, and her past as the Attorney General for California was brought up. University of San Francisco law professor Lara BazElon said in a The New York Times op-ed: “Time after time, when progressives urged her to embrace criminal justice reforms as a district attorney and then the state’s attorney general, Ms. Harris opposed them or stayed silent. Most troubling, Ms. Harris fought tooth and nail to uphold wrongful convictions that had been secured through official misconduct that included evidence tampering, false testimony and the suppression of crucial information by prosecutors.”

Critics like this can’t go unnoticed by potential supporters. It’s always good to support the people who look like they have the people’s best interest at heart, but that’s what tricks people oftentimes. You can’t just blindly follow, or in this case, vote for someone just because they look like you. However, just because Harris may not have been the best choice, that does not mean that there are not good candidates of color. People just need to be worried that they may not have their best interest in mind.

Now, more than ever, it’s important to be invested in politics. Beyond electing a competent candidate to defeat Trump, the country seems to be at a great crossroads in how it should run. Student loan debt is climbing every day, the cost of living is increasing and even the system of capitalism is being questioned.

So, where do we go from here? Often, it seems that the black community has to pick between the lesser of evils. We have to negotiate with potential candidates on what they are going to do on the issues that directly affect us.

We just need to do our due diligence in the future to be sure to support potential presidential candidates of color. For now, everyone needs to realize that being involved in the political processes of our country is just as important as supporting candidates of color.