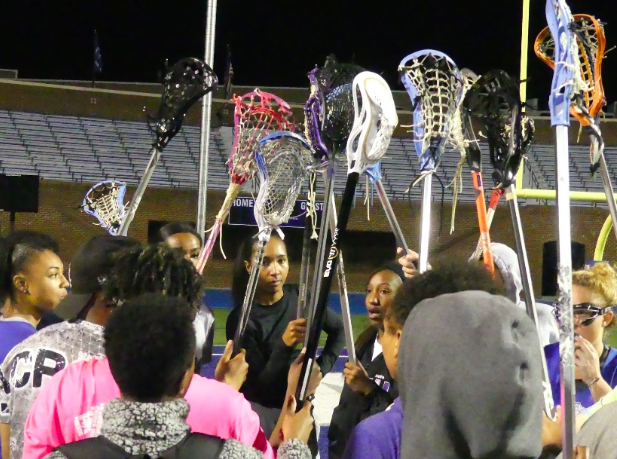 At the beginning of the 2019-2020 school year, the idea of forming a club for women’s lacrosse at Hampton University came to fruition.

What started as a GroupMe chat with about 25 girls became a team and family who practice, train and grow together. Shortly after the formation of the team, seniors Johnathan Napier and Kevin Mondy Jr., who are members of  the Hampton University Men’s Lacrosse team, volunteered to be coaches.

They developed a weekly schedule for the team which includes morning conditioning three times a week as well as nightly practices four times a week. Both coaches have taken time out of their busy schedules as student athletes to invest in the development of this team. Despite the obstacles the team faced, such as not having all of the appropriate gear necessary or difficulty obtaining field time with the lights, the team remained determined and found time for practice.

When asked about her favorite part of being on the team, HU sophomore psychology pre-med major Nina Pinto said, “Seeing the growth every practice. We really banded together as a family and each of us brings something to the table, so we are consistently improving and thriving off of each other’s progress and energy.”

Throughout the semester, the team has grown closer through team dinners and bonding activities, which have heavily contributed to their growth on the field. Also, the key components that have helped the team continue to grow is the dedication that everyone has to improve their skills and their lacrosse IQ.

According to defender Hunter Maddox, a second-year nursing major, she hopes that in the future the program is “taken seriously and eventually becomes division one.” Although there are a wide range of experience levels on the team, everyone supports and pushes each other to improve. This strong sense of teamwork and desire to take the program to the next level will allow the team to succeed in the future. Another goal by team co-captain Amira Sparrow, a second-year psychology major, is for the team to have “scrimmages and games with other schools.”