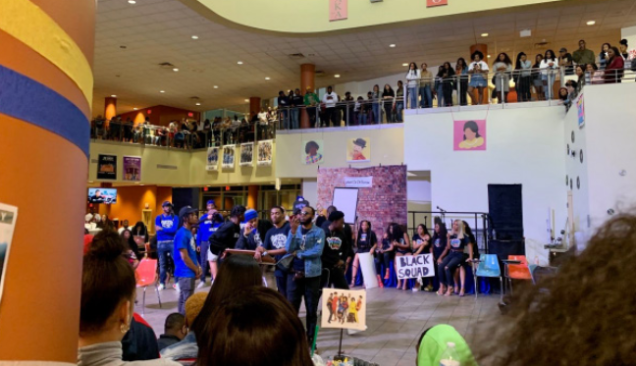 Every floor of the building was packed to watch the Blue Squad battle the Black Squad in competition for who could make the audience laugh the most.

There were multiple rounds to the night, with each round covering a different topic that kept the audience laughing. Segments ranged from a family reunion round that sent teams out into the crowd to pick an unsuspecting audience member to an impersonation round that had team members doing their best imitation of whatever the theme was. The stage was set, and the rules for the rounds were placed. Witty, and sometimes even personal, jokes were exchanged back and forth between teams and sometimes even against actual audience members. For two hours, teams did not back down.

The groups’ approaches were also very important to winning over the audience on this night. It was still a competition between the two, and whoever had a combination of the most dings from DJ Vince and the most reaction from the crowd won that specific round.

When asked how the audience played a role in the types of jokes the teams were going to tell, HU student Ishani Lee, a senior journalism major from Petersburg, Virginia, and member of the Blue Squad, said, “If other people’s jokes were similar to mine and the audience didn’t laugh, I went a different angle.”

Not all the jokes were a hit, with misses were made obvious by the crowd’s reaction.

During intermission of the show, there were special performances from the four finalists of People’s Choice that took place two weeks ago. The winner of the competition would get the opportunity to open the show for the DaBaby concert the following day. A very talented duo ended up winning this time, and the rest of the performers won prizes as well, ranging from opening for Kash Doll at the tailgate Oct. 25 to receiving unreleased

A Different Homecoming merchandise. After intermission, the jokes kept coming, and the teams picked up right where they left off.

HU’s Wylin’ Out Girls also filled the stage, helping to keep the crowd entertained by throwing candy and snacks to them, joining in on the jokes during the “Talkin’ Spit” and “Pick Up” rounds. The “Pick Up” round really showed each team’s creative side. The night ended with a fiery last round and final remarks from all of the opponents on both sides. The DJ for the night, DJ Vince, also added to the atmosphere with his comical commentary and funny sound effects. However, through all of the back and forth, this friendly rivalry ended up in a tie due to the main fact that no one had kept track of who won that round! In the end, it came down to the audience to pick who won, resulting in a win for the Black team. The night was filled with laughs and fun that made it a great way to spend HUHC168.