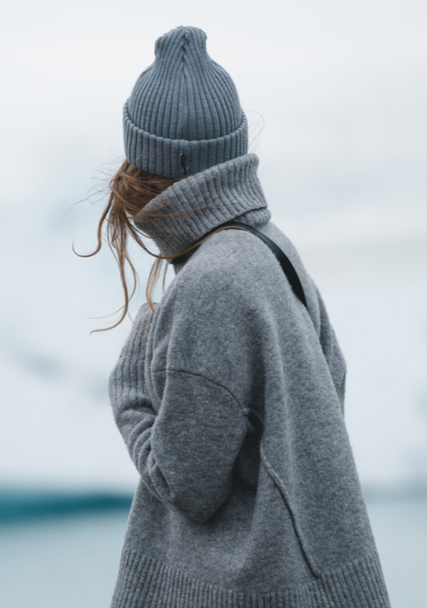 It’s that time of the year: sweater weather. Most students are excited for the change in weather because it allows them to throw on their favorite pair of jogging suits or a hoodie.

The NikeTech is by far one of the most popular sweatsuits among young men while women mainly wear athleisure during the chilly months. College students often prefer comfortable clothing.

“I believe feeling comfortable is better due to the fact that you can still put things together when you dress comfortably. Fashion in itself is a statement, depending on how you put the pieces together,” said Hampton student Gabrielle Tazewell, a third-year journalism major from South Orange, New Jersey.

Cozy outfits for the fall have been a trend for quite a while, but there are also new emerging ones as well. With the return of fall comes the return of fresh, new fall fashion trends for the season.

You may have noticed that graffiti-inspired urban wear has resurfaced lately. The airbrushed white tee rose to popularity in the early 2000s. The shirt quickly became an iconic fashion staple shortly after.

Several celebrities and influential people have been seen wearing the throwback tee.

Following his Yeezy Season 3 fashion show presentation, Kanye West wore a tribute shirt of his mother in the airbrush effect.

Not only is this trend reaching a large audience, it’s also becoming more prevalent at Hampton University. In the homecoming fashion show, the brand HBCU by Kels showed their take on the trend. They took a new approach by incorporating their HBCU logo into the airbrushed design.

The line ranges from white tees to biker shorts and cropped hoodies. The brand ensures comfort along with style.

“Being comfortable is always my first priority; that’s why it’s implemented into HBCU’s clothing so much,” said HBCU brand founder and HU student Kelsii Robinson, a second-year biology integrative major from Philadelphia. “However, just because you are comfortable doesn’t mean you cannot be stylish at the same time.

“If I’m wearing a HBCU sweatsuit, I usually pair it up with some fashionable socks, sneakers and jewelry to make it more of a look.”

Flared denim jeans are back and better than ever. By the 1970s, flared pants became so popular that major designers began to take notice. With notable celebrities such as Sonny and Cher wearing the style, the pants slowly became a staple in fashion history.

“Ironically, the cut that had previously been a symbol of rebellion and ‘anti-fashion’ became a full-blown trend that would characterize the ’60s and ’70s to future generations,” according to Startupfashion.com.

This style is now much more diverse than it was in the ’70s. The jeans are now made with looser and more comfortable styles, which benefit everyone’s body shape.

Not only is the style offered in a bell-bottom shape, but it has also evolved into boyfriend jeans and wide-leg pants as well.

With a new season comes new trends, and there are many to follow or some you can make on your own. Staying comfy while also being stylish is becoming easier as fashion evolves.