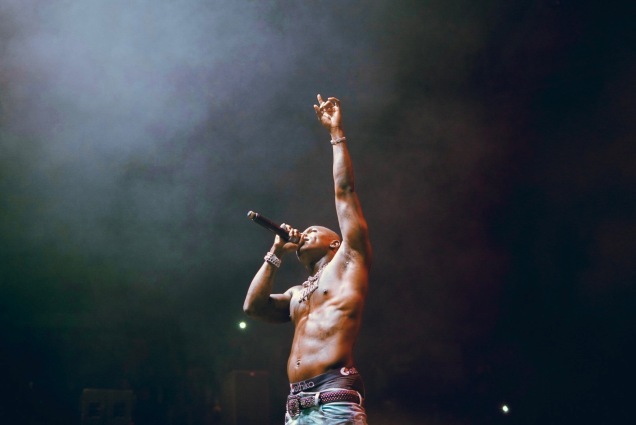 More than 1,000 Hampton University students and Hampton Roads residents Oct. 26 piled into the HU Convocation Center to kick off the HU Homecoming weekend with the annual Homecoming Concert.

Da Baby, along with Hampton University’s best talent, performed at this year’s concert and gave Onyx 11 perhaps the greatest concert in their tenure at Hampton. Since the arrival of Onyx 11, this class has made it their duty to leave a mark on Hamptons University’s campus.

“With our homecoming theme being ‘A Different Homecoming,’ ode to the show ‘A Different World,’ said to be inspired by the college life here at Hampton, this year had to be special,” Hampton University senior Nyla Whyte said.

Even the opening acts gave Hampton a different show. Through diverse performances including an R&B duet KaEl & Heather featuring trumpeteer DeAndre Smith-Brown and a father/son rap duo Big Rick & Lil Rick, the crowd partied in the Convocation Center waiting for the main act.

DJ Izzy kept the audience on their toes with dance battles as well.

Da Baby opened with his platinum single “Suge.” From there, he took song requests from the audience, performing fan favorites from old albums and his new album KIRK, a tribute to his late father’s last name.

“It was just like freshman year,” student Tenaj Bell said. “He partied with us like it was something we did every weekend. We haven’t had that in so long.”

As he jumped in the crowd and fraternized with students as if he was one of them, the North Carolina rapper did more than set the tone for “A Different Homecoming.” His child-like antics on and off stage and his, at times, outlandish rockstar behavior on social media have made his rise to fame nothing short of different.

A viral clip from his performance at HU was even featured on the Instagram gossip page “The Shade Room” and landed more than 1 million views.

The nostalgia of the concert was felt through current and returning HU students.

“I’m so glad I came for homecoming this year,” said Avana Seenerine, a former HU student. “The energy was what I know everyone wanted for Onyx 11’s last homecoming.”

The Onyx class has always been diligent in bringing the best to Hampton University. From eager freshmen to excited seniors, it’s been imperative for this class to show other classes how we party and give thanks to the class of Onyx 10 for showing us how it’s done.

“Y’all showed out for real,’” Da Baby said as he closed the show with an encore of “Suge.”