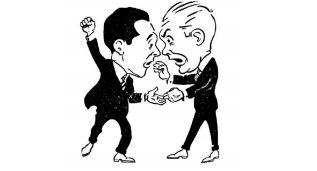 “Confirmation bias” is a psychology term that describes the tendency for people to autonomously esteem statements that support their beliefs and biases while also discrediting anything that contradicts them.
This trait allows people to hold on to ideas that may easily be overthrown, give a strong sense of security or continue to deceive one’s subconscious. As Dr. Shahram Heshmat, a professor at the University of Illinois, said in psychologytoday.com, “Confirmation bias suggests that we don’t perceive circumstances objectively. We pick out those bits of data that make us feel good because they confirm our prejudices. Thus, we may become prisoners of our assumptions.”

Consider confirmation bias happening simultaneously within people who maintain certain values simply because they were raised with them or their peers influenced them.

The prevalence of those unsupported ideals may continue to be unchallenged for long periods without the individual practicing self-criticism. For some people, especially college students, such as those at Hampton University, challenging their own beliefs may prove more difficult.
“People our age surround themselves with people who support the same opinion, so they never really challenge anything,” said Chloe Jones, an HU freshman criminal justice major.

It is important to also consider the use of social media, where young adults can be constantly stimulated with images and stories that only tell a familiar side of a story or idea. The concept of never seeking the reason for actions or ways of thinking has a range of consequences. One consequence to examine is the psychological effects of the unwillingness to change. When someone grows to defend their ideological treasures at all costs, and then are presented with counters, they experience the backfire effect.

As David McRainey – author of the internationally bestselling book You Are Not So Smart – explains on his blog:

“When someone tries to correct you, tries to dilute your misconceptions, it backfires and strengthens them instead. Over time, the backfire effect helps make you less skeptical of those things which allow you to continue seeing your beliefs and attitudes as true and proper.”

Another consequence to examine is the personal effects of this mental pride. Consider beliefs in religion, politics or science. Thoughts in these areas are imperative to everyday decision-making. If individuals refuse to take an active role in removing the chains of the backfire effect and confirmation bias, how might truth ever be spread? How can someone know if they are following a sound doctrine without the ability to determine if it is sound? These questions and concepts make hope for change seem futile.

However, there is a solution. With the following process, one can take the initiative to combat their static state. First, one should take time to consider why they believe a particular idea to be true, correct or morally right. “Is there any logic, reasoning, and/or evidence to hold my belief in place?” The next step is to practice having healthy, constructive debates with other people.

Evangel Lawrence, an HU freshman bio pre-med major, thinks that healthy debates are “a good way to introduce yourself and others to new perspectives, and it will allow people to become more understanding of each other’s differences.” Still, this comes with a catch. Naturally, most people debate others to get their point across. Instead, the more humble and fruitful path in debating is to listen.
When an effort is made to take in the points of the opposition before retorting, the humility gained allows for closely held values to be properly studied. Thus, emotionally charged arguments can be transformed into constructive discussions.
The final step is to seek logical foundations for beliefs. The purpose of introspective questioning and debate is to find cracks in the foundation of ideological fallacies. Equally important is the willingness to rebuild those foundations if a better way is discovered. As Ozan Varol, a rocket scientist turned law professor and bestselling author, states on Heleo.com, people should “strongly believe in an idea, but be willing to change your opinion if the facts show otherwise.”

This is all said to encourage readers to consider various ideas and always look for other perspectives. You’ll always gain more from it.