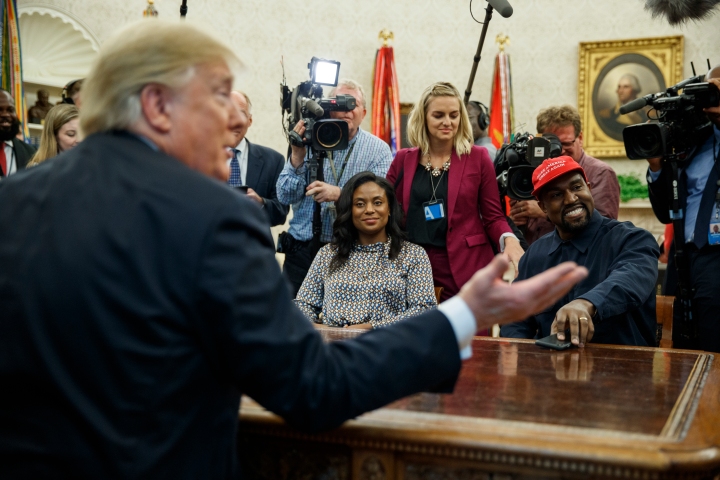 “This hat, it gives me power,” West said to Trump. “Something about when I put this hat on, it made me feel like Superman. You made a superman.”

West has become one of the president’s most consistent celebrity supporters. Their meeting was televised by major networks. A 19-minute CNN version can be seen at tinyurl.com/kanyetrump.

West spoke of how he was misdiagnosed with bipolar disorder, when it was actually sleep deprivation.

While some view West as a spokesperson for certain issues, others criticize him for speaking on issues they think he is not qualified to address.

“Kanye is a great artist and should stick to music, but when it comes to politics, the things he is saying are kind of scrambled and confusing,” Hampton University student Jada George said. “They just don’t really make sense.”

Many critics do not understand how West, an African American man, can actively support a president’s agenda that has been linked to discriminatory actions and making racially controversial remarks in the past.

“I’m disappointed in Kanye because as a black male in this society, he should realize that taking a stand with an individual who not only despises his race, but other races as well, only diminishes his character and the name he built for himself,” HU student Michelle Ezeigbo said.

After the meeting, many celebrities took to social media to criticize West for taking attention away from more pressing matters. Some of them even questioned Trump and West’s relationship, seeing it as bizarre and unconventional.

“Watching @CNN, seeing Kanye at the White House this afternoon was some of the saddest stuff I’ve seen in quite [some time],” ESPN analyst Stephen A. Smith tweeted. “Not going to go OFF, though. I’m just sad. I’ll leave it to y’all to state the obvious as to why.”

While many people criticize the meeting at the White House, some Republicans are finding it insightful and inspiring to hear West speak out.

He is even being called the “New Republican Hero.”