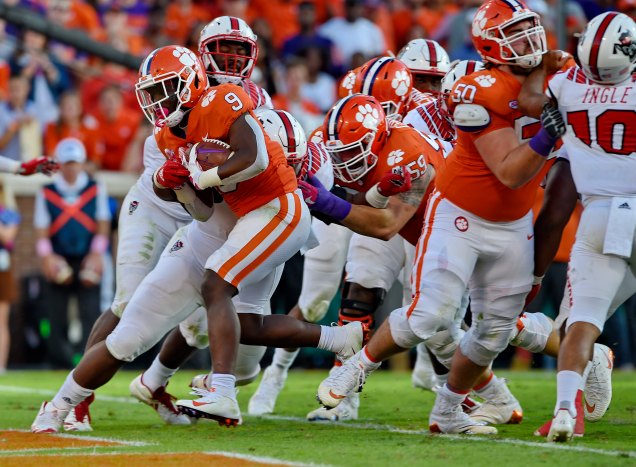 When the 2017 college football season ended, there was only one undefeated team left: the University of Central Florida.

As of Week 9 in 2018, there are five teams remaining with zero losses on their record: Alabama, Clemson, Notre Dame, UCF and South Florida.

With three undefeated teams losing in Week 8, others are looking forward to the challenge to beat the best college football clubs. Which remaining teams have the best opportunities and biggest challenges to finish undefeated?

Alabama: Alabama sophomore quarterback Tua Tagovailoa re-injured his sprained right knee and was ruled questionable to return against Missouri after suffering the injury during Saturday’s contest, according to ESPN. However, the injury didn’t seem to affect him this past week as Bama rolled past Tennessee 58-21. The most rugged team the Crimson Tide will play is LSU. The Tigers previously beat an undefeated Georgia squad. Alabama has won their past seven matchups against LSU, but the strong and resilient Tigers seem ready for the challenge as they continue to improve.

Notre Dame: The hardest matchup for Notre Dame comes in Los Angeles during Week 13 when the Irish face a top-30-ranked USC Trojan defense. The Trojans were ranked before the season began. After a rough start, they have won their past three, Traveling to USC and winning won’t be an easy task for Notre Dame. But The Fighting Irish are no newcomers to hard tasks as they have already defeated Michigan, Stanford and Virginia Tech.

Clemson: When Clemson faced the then-undefeated N.C. State Wolfpack in Week 8, the Tigers routed them 41-7. N.C. State at that point was Clemson’s toughest remaining opponent. Due to Clemson not having any ranked opponents left on the schedule, it would make perfect sense for the Tigers to finish undefeated and head into the College Football Playoffs.

Prediction: Alabama coach Nick Saban has never missed a College Football Playoff, and it is unlikely that this year will be his first. Alabama hasn’t even had a close game thus far this season, and while the Tide will be tested against LSU and in the SEC Championship Game, it would be unwise to pick against them. Clemson should have smooth sailing for the rest of the season due to a weakened ACC conference.

With Notre Dame having already won the tough part of its schedule, the Irish could be a three seed. The wild cards are USF and UCF. Last year, UCF finished undefeated and missed the College Football Playoff, if the Knights finish with no losses this year, the committee won’t keep them out.